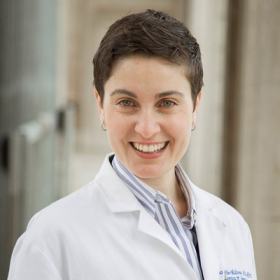 Assistant Professor of Obstetrics and Gynecology and, by courtesy, of Epidemiology and Population Health

Juno Obedin-Maliver, MD, MPH, MAS, FACOG, is an Assistant Professor in the Department of Obstetrics and Gynecology at Stanford University School of Medicine.

Dr. Juno Obedin-Maliver is a board-certified obstetrician/gynecologist who provides excellent clinical care and strives to advance scientific knowledge through her research.

She practices full-spectrum gynecology including outpatient, in-patient, operative, and emergency care services. This specifically includes collaborative management of cervical dysplasia and abnormal pap smears, abnormal uterine bleeding, contraception and family planning, pelvic pain, abnormal discharge, sexually transmitted infection testing and treatment, and more. She specializes in the gynecological and reproductive health care needs of sexual and gender minority people which include but are not limited to lesbian, gay, bisexual, transgender, queer and questioning (LGBTQ+) people. This interest and experience drives her research interests towards promoting the health and well-being and equity of LGBTQ people.

Dr. Obedin-Maliver, is the Co-Director of The PRIDE Study (pridestudy.org), a multi-site online prospective longitudinal cohort of sexual and gender minority individuals based at Stanford. She also serves on the medical advisory board of the University of California San Francisco Center of Excellence for Transgender Health and is helping to author the next version of the World Professional Association for Transgender Health (WPATH) Standards of Care. Dr. Obedin-Maliver has also been active in health policy including involvement in helping to legally redefine consideration of sexually intimate partner status and to remove the Medicare Non-Coverage Determination ruling on gender -affirming surgeries.

For more information about her research and career please see: pridestudy.org and http://med.stanford.edu/obedin-maliver.html
View Full Biography »

You may also submit a web referral or complete a referral form and fax it to 650-320-9443 or e-mail the Referral Center at ReferralCenter@stanfordhealthcare.org