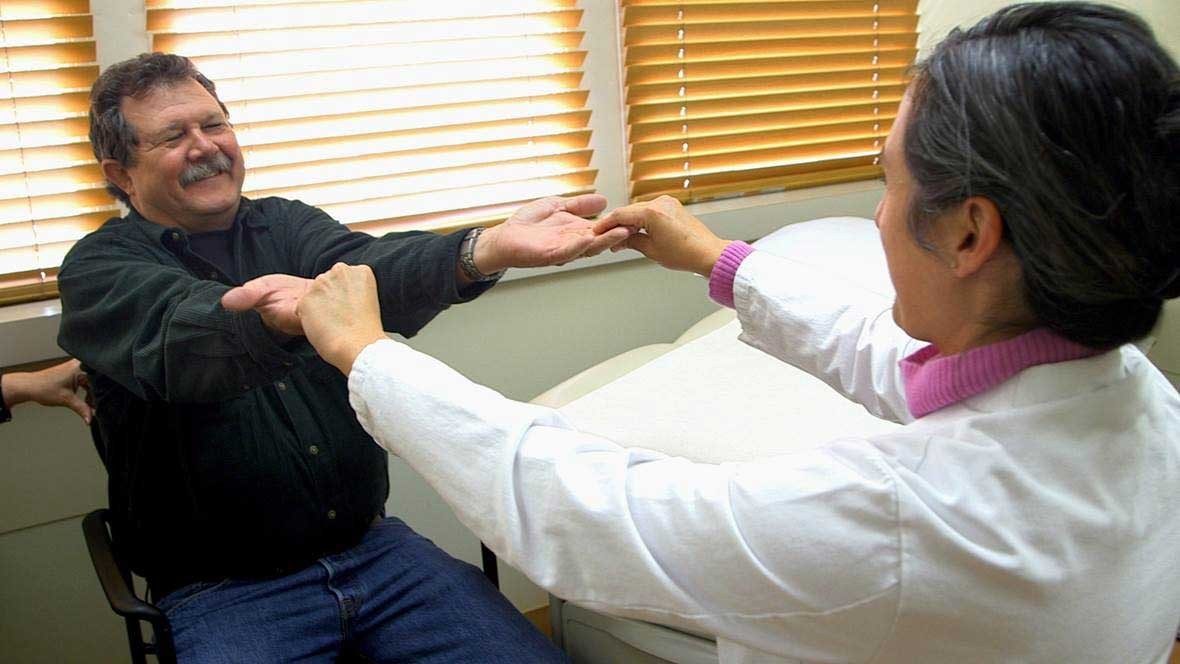 For months, Willo Harris watched her husband, Mike, 60, gradually decline, becoming less and less able to do simple things. He had retired several years ago after a long career in the railroad industry to enjoy travel in their RV to visit family and places they'd dreamed of seeing. Harris, whose health was otherwise good, began developing some disturbing problems: He would lose his balance easily, he couldn't get in and out of a car, he couldn't carry a cup of coffee, he couldn't remember the first words of a sentence by the time he finished reading it. He was losing his ability to live his everyday life.

As they sought answers from doctor after doctor, "It was very scary watching him decline," said Harris' wife, Willo. "But I had to keep going, to be there for every doctor’s appointment because I didn't want him to walk out and not remember what was said." After months of seeing local doctors in Southern California who couldn't seem to find anything wrong with him, Harris finally connected with one who suspected he might be suffering from a brain tumor and ordered an MRI.

The MRI revealed a fist-sized tumor in Harris' brain and the local doctor immediately shared the frightening diagnosis with the couple. "It was like the air was sucked right out of the room," Willo Harris said.

The MRI revealed that the fist-sized tumor next to Harris' brain was a meningioma. It had grown so large that it was the reason for Harris' debilitating symptoms—the loss of balance, control of his limbs, memory, appetite—everything. Meningiomas do not grow in the brain, but in the space between the brain and the skull. They are also the most common type of primary brain tumor according to the American Brain Tumor Association, diagnosed each year in an estimated 21,000 people.

Meningiomas represent about one-third of all primary brain tumors; about 85% of meningiomas are non-cancerous and slow growing.

In the midst of the fear the couple felt about what might come next, they were relieved to know, after going for months without answers, that there was a real reason for Harris' symptoms "and that it was going to be treated," he said. "It showed that I wasn't crazy and that there was actually something causing me to lose control of my life!"

Because of the size and location of Harris' tumor, the local doctor recommended that Harris go to the Brain Tumor Center at Stanford Health Care. She knew that Stanford's renowned neurosurgeons had the expertise and experience to remove Harris' large and complex tumor.

The next day, Willo Harris drove her husband the five hours from their home in Southern California to Stanford. Even though it was the Friday afternoon before Labor Day, Stanford Health Care was ready to see Harris.

Melanie Hayden, MD, assistant professor of neurosurgery at Stanford Health Care, was the doctor who treated Harris. Hayden specializes in the most complex surgeries to remove brain tumors, cancerous and benign. She averages about 100 complex surgeries each year. In addition to her clinical practice, she also conducts research into neurological cancers. That research has produced more than 25 journal publications and won recognition from the National Institutes of Health.

For Harris, in search of the right care for so many months, Hayden was the right doctor. "When she came in, it was like I was her only patient," Harris said. "I felt very comfortable. She said, 'This is serious, but we're going to get through it.' She had a lot of confidence. I really felt like she knew what she was doing—and that was a good feeling."

The additional advanced imaging Hayden ordered gave her a more detailed view of Harris' condition, something she would need for his surgery. The images showed just how much Harris' tumor had invaded the meninges, the space between his brain and his skull. That space is so narrow that the tumor, as it continued to grow, pushed against his brain, dramatically disrupting its function—and in turn causing Harris' increasingly long list of symptoms.

Some brain tumor symptoms can look like other problems, Hayden said, including a stroke. Once a tumor has been found, however, "We have to choose the right surgery for the right patient." Neurosurgery is a highly specialized field and technically difficult, which makes each patient's treatment unique.

It took Hayden about five hours to remove Harris' tumor. Given its location in that narrow space so close to the brain, coupled with its large size, the removal of Harris' tumor was extremely complex and challenging, yet something that Hayden felt comfortable doing. A few hours after the surgery, Harris tried out his motor control for the first time with a classic neurological test: touching his finger to his nose. "I was able to do that simple test immediately," he said. "I thought, 'Oh, man, this is so nice!' And I could snap my fingers, too!"

Harris has made a complete recovery and just marked the first anniversary of his brain surgery. He continues to see Hayden for regular check-ups.  Meningiomas can recur, for a variety of reasons, over time: 25% to 37% reappear within 10 years. That doesn't worry Harris. "I am blessed," he said. "I have a second chance at life."

In January, the new Stanford Neuroscience Health Center will welcome its first patients. This five-story, 92,000-square-foot building includes advanced imaging, patient care technology and interiors designed to be sensitive to the needs of people with neurological conditions. Hayden will be one of more than 200 expert doctors covering 21 neurological subspecialties providing care for patients at the new Center.