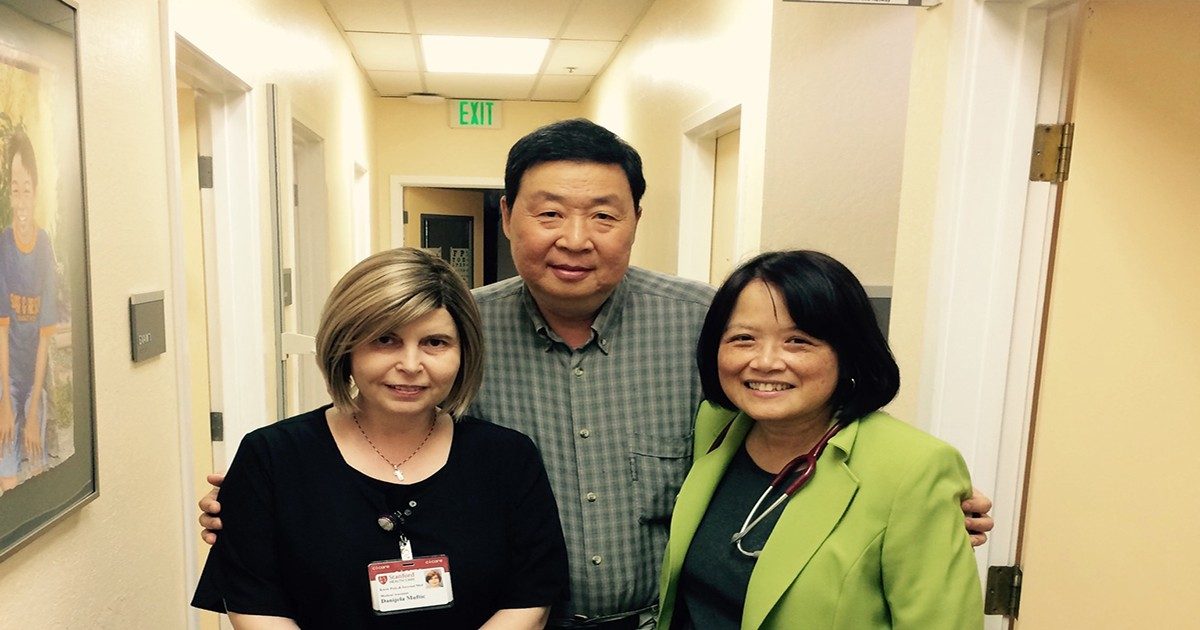 STANFORD, CALIF. –  After more than 30 years of chronic kidney disease and two failed kidney transplants, Jonathan Chan's only hope for a cure was a third transplant. Chan waited seven years on the national kidney transplant list, but his blood type and other factors made the odds for finding him a match nearly impossible: less than 1%.

"The future was not bright for me," Chan said. "I was in a bad place after so many years of being sick, and my pain was getting worse over time."

Then his luck changed. Ester Kwok, MD, who is a Stanford Medicine affiliated physician through University HealthCare Alliance (UHA) at Kwok Pediatrics and Internal Medicine in Los Gatos, had a change of heart that saved Chan's life. Although she had deep cultural and religious views about the body, Kwok reconsidered her views on organ donation when she learned that two people she knew needed new kidneys: Chan, and one of her staff members. Coincidentally, both shared her blood type.

"I didn't believe in organ donation, but four years ago, one of my staff members went into kidney failure and was looking for a donor," she said. "At the same time, Jonathan Chan, who is the son of one of my patients, stopped bringing his mom to her appointments because he was too ill and needed to be on dialysis."

When Kwok's colleague was matched with a cadaver kidney, Kwok decided to join the National Kidney Registry and find out if she was a match for Chan. Ultimately, she was not a match, but she decided to enter the national registry for chain donation, which uses a complex algorithm to match donors and recipients across the country. This would increase Chan's odds for finding a match.

"I had faith that if it was meant for me to donate, the impossible would become possible," Kwok said.

Three years later, her phone rang. A live donor match was found, and through a 12-person organ donation chain, her donation would enable Chan to receive a new kidney. Kwok began exploring what it would take for her to take time off for the donation and find staff to care for her patients.

Kwok learned that she would be eligible for six weeks of paid leave through California SB 1304, a bill passed in 2011. This bill, commonly called the Michelle Maykin bill, requires employers with 15 or more employees to offer paid leave for employees who are called to donate organs. Stanford Health Care's UHA includes 267 other Stanford Medicine affiliated doctors, allowing Kwok to take the time off with pay and have a large pool of physicians available to cover her absence.

"The timing of all of this was just right," Kwok said. "When I joined the registry four years ago, I was in private practice. I would not have had the finances to donate, and I would not have had other physicians or providers available to cover for my patients. Being part of Stanford's UHA really made this possible. Donation is a collaborative effort, and I benefitted from the support of many people who made this possible."

Chan discouraged Kwok from moving forward with the transplant because he was concerned about how it would impact her family and her medical practice.

"As a doctor, she takes care of many, and I worried what would happen to her after the transplant," Chan said. "Ultimately, she convinced me that she had faith for the both of us—that it would be okay."

Since Kwok was not donating her kidney directly to Chan, he wondered whether there was an alternative to her participating in the 12-person donation chain. After learning that the transplant would not be possible without Kwok's altruistic donation, Kwok and Chan took a leap of faith and moved forward with the transplant.

Kwok and Chan had their surgeries at Stanford Health Care in June 2015. Marc Melcher, MD, served as surgeon for Kwok's kidney removal and Chan's kidney implantation.

"I was thankful for the advances in technology that allowed for a match like this," Chan said. "My kidney came from a woman in Maryland. They used an algorithm to match all these people. In the old days, this would not have been possible.”

Many do not share in Chan's luck. There are currently 121,678 people waiting for organ transplants in the U.S.  According to the National Kidney Foundation, 13 people die each day while waiting for a life-saving kidney transplant. Asian Americans face a shortage of available organs and make up 7.2% of the U.S. organ donation waiting list – a disproportionate share. Kwok said this is likely a reflection of views about the body and ancestry that are held by several Asian cultures.

Today, Chan and Kwok both live with one healthy kidney. Chan now has the time and energy to do things he hasn't been able to do for years: going for walks and working at home. Kwok is grateful for the way she has made a full recovery from the donation.

"My energy levels and work capacity have gotten back to normal, and if I were to die tomorrow, my life has had meaning," Kwok said. "You teach your children through what you say and by your actions. I've taught them community. We shouldn't just live our lives for ourselves, but try to make our community a better place in whatever way we are able. If something were to happen to me, I know I've made a difference."