Silas Richardson was in the hospital with a heart rhythm disorder that his doctors couldn’t get under control. Surgery at Stanford Health Care – ValleyCare solved the problem.

In the spring of 2020, Silas Richardson was seeing his doctor regularly, trying to lose weight and taking medication for high blood pressure. Semi-retired, he lived with his wife in a small town in California’s San Joaquin Valley and worked part time at The Home Depot.

One day, after returning from a vacation, he felt “a little off,” he said. “I was working in the plumbing department, and it was really busy, and I was getting more and more tired.”

The 61-year-old checked his blood pressure, which looked normal. “But I took my pulse, and it was in the hundreds,” he said. “I thought, ‘Oh, that’s not good.’”

Richardson made an appointment to see his doctor. A nurse took his pulse, which was normal at the time. But the results of several other lab tests — including an electrocardiogram, which measures electrical signals in the heart — told a different story.

Silas Richardson (with his wife, Lori Richardson) is no longer bothered by atrial fibrillation after undergoing a procedure at Stanford Health Care – ValleyCare.

“My doctor came in the room after getting the test results with a very distressed look on her face,” Richardson said. “She told me, ‘Silas, I’m calling an ambulance right now. You are in total atrial fibrillation and have been for a while.’ It was a life-or-death situation. I had it worse than anyone she had seen in some time.”

Richardson talked his doctor into allowing his wife to drive him to a hospital in Modesto, where he was checked into the intensive care unit. For three days, physicians repeatedly tried to get his heart to revert to a normal rhythm. They gave him various combinations of medications, but to no avail.

Then, they sent electrical currents into his heart through paddles taped to his chest — a procedure called electrical cardioversion. After four attempts and four failures, they gave up on that approach.

Atrial fibrillation, a common heart-rhythm disorder, affects about 2.7 million Americans, according to the American Heart Association. Caused by abnormal electrical signals in the heart, it can lead to palpitations and fatigue. It can also increase the risk of stroke, heart failure and death. In most cases, atrial fibrillation can be managed with medications and lifestyle changes.

But in a minority of cases, including Richardson’s, those options don’t work, and more invasive procedures are necessary. One such procedure, invented by a physician who now works at Stanford Health Care – ValleyCare, may have saved Richardson’s life.

“My doctors were kind of at a loss,” Richardson said. “I just wanted to get the hell out of the hospital.”

His heart needed more help. When a cardiologist at Memorial Medical Center told him about a minimally invasive heart surgery called the total thoracoscopic maze, or TT maze, he wanted to hear more. His other option was open heart surgery, which he wanted to avoid.

TT maze was invented by James Longoria, MD, a cardiothoracic surgeon and clinical associate professor now at Stanford School of Medicine. Richardson met with Longoria and his team at Stanford Health Care – ValleyCare in Pleasanton, about an hour’s drive from Modesto, and agreed to undergo the procedure.

“When other treatment modalities fail for those with atrial fibrillation, patients usually end up coming to someone like me,” said Longoria, who joined ValleyCare last year, with the opening of the hospital’s heart surgery clinic.

When surgery is needed

It’s unknown why the abnormal electrical signals that cause atrial fibrillation occur, Longoria said, though factors such as diabetes, high blood pressure and obesity can raise the risk. The abnormal electrical signals prevent regular blood flow from the heart’s upper chambers, the atria, to the lower chambers, or ventricles. Blood can pool in the atria and form clots. If a clot travels to the brain, it can cause a stroke.

For atrial fibrillation that doesn’t respond to lifestyle changes and medication, a type of open-heart surgery called a Cox-maze prodcedure has been available for decades. After a patient’s heart has been stopped and he or she has been placed on a heart-lung machine, which circulates oxygenated blood to the body, the surgeon makes a series of incisions inside the atria that act as a “maze” for the electrical signals. The abnormal electrical signals bounce off the scar tissue from the incisions and are forced to self-correct into a normal pattern.

For patients with atrial fibrillation who are already planning to undergo open-heart surgery for other reasons, such as a valve repair, the procedure is recommended. But for those like Richardson, less invasive versions, such as TT maze, are now an option.

To perform TT maze, a surgeon uses special instruments to make small incisions on the sides of the chest to access the heart, deflates the lungs and opens up the paricardial sac that surrounds the heart. Using an endoscope — a tiny camera attached to a long thin tube — to guide him or her, the surgeon then applies ablation techniques using heat or cold to create a scar pattern on the outside of the heart to disrupt the irregular electrical patterns. No heart-lung machine is necessary. Longoria filed a patent for the procedure in 2008, and it is now used in hospitals across the nation.

“What you want is to create roadblocks and allow the natural impulses to come back,” Longoria said. “The scar tissue that we form creates blocks to these aberrant signals, and they self-terminate by going into the scar tissue.”

If the atrial fibrillation returns, as it did for Richardson, then another step is recommended about three months after the surgery: a nonsurgical procedure called a catheter-based endocardial ablation. Small, flexible catheters are inserted through several veins, usually in the groin, and directed to the areas inside the heart that are not accessible using the TT maze procedure. Electrodes at the ends of three or four catheters stimulate the heart to locate the area that is sending out the abnormal electrical signals. Then the doctor kills the problem-causing heart tissue with extreme heat or cold.

“With this staged hybrid ablation, as we call it, you get the TT maze procedure first, and then about three months later, you come back for the catheter ablation,” Longoria said. “We call it the one-two punch.”

Longoria performed Richardson’s TT maze procedure on July 6, 2020, at ValleyCare. His family drove him to the hospital, but because of the pandemic, they had to wait in their car while a nurse came out to give them updates. He was wheeled into surgery about 7 a.m. In the early afternoon, Longoria came out to the parking lot to announce that the surgery had gone smoothly.

“I had about five or six tubes coming out of me,” Richardson said. “They collapsed both lungs for the surgery. I was pretty beat up afterward.”

That wasn’t quite the end of his atrial fibrillation, though. About seven days after the surgery, he was back at the Modesto hospital for electrical cardioversion. This time, it worked. The same thing happened another week later, and again the treatment worked.

Then, in late summer of that year, he underwent a catheter ablation in Modesto. He has been free of atrial fibrillation ever since.

About two months later, he was able to get off his medications, Richardson said. “As far as my doctor is concerned, my heart is healed. I can’t thank Dr. Longoria and his team enough.”

Richardson lost 25 pounds during his hospitalizations and has since lost another 25, bringing him down to 250 pounds. He’s eating healthier food and drinking less alcohol, he said, and he’s planning to go back to work part-time in a month or two.

“I’ve been getting better and better every day,” he said.

Tracie White is a science writer in the Office of Communications. Email her at tracie.white@stanford.edu.

Want to stay connected and informed?

Sign up to receive updates on innovations at Stanford Health Care, including the latest research and resources, advances in treatment and technology, and more. 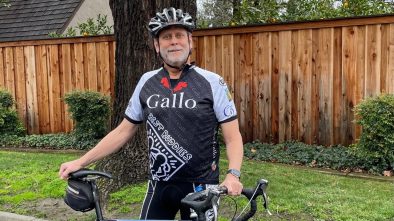 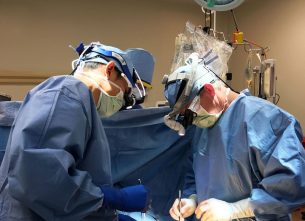