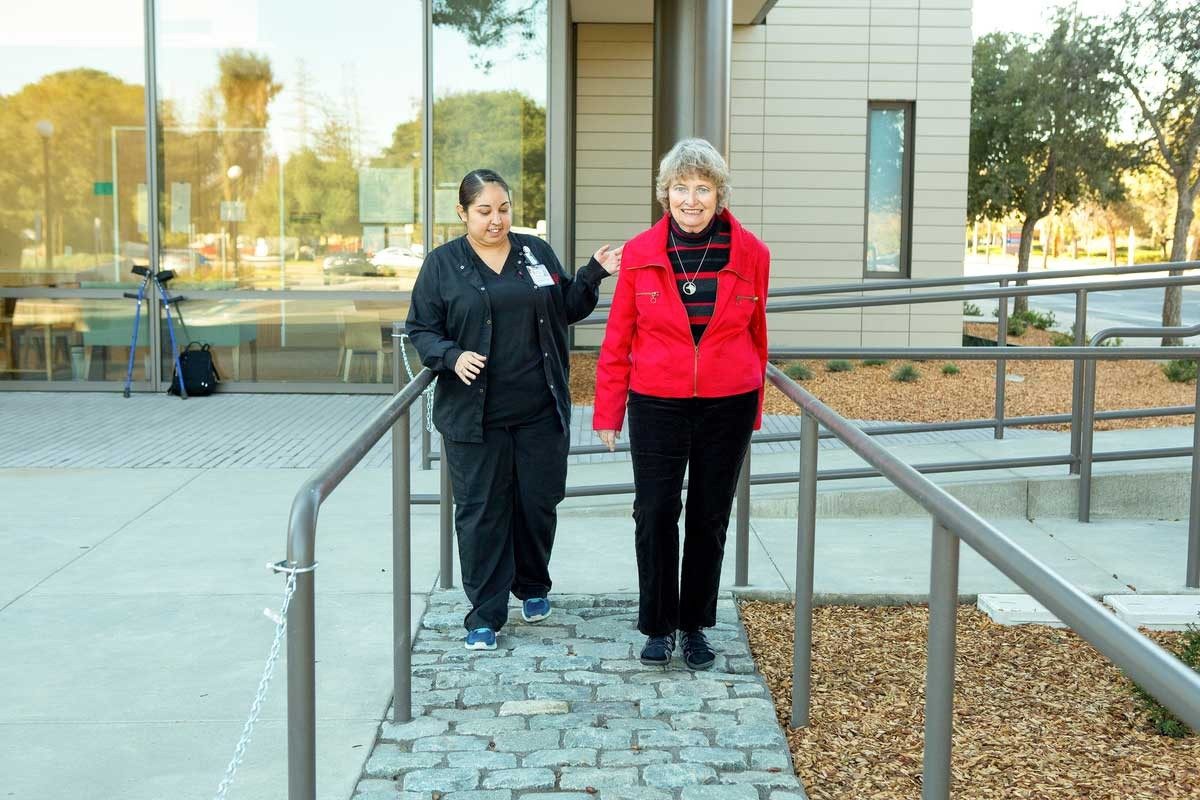 As a physical therapist, Jinny Fruin understood the biomechanics of the human body. She treated children and adults with spinal problems, back pain, and other limitations associated with injuries and medical conditions that change body mechanics. Nevertheless, she was willing to endure her own pain and disability to avoid surgery for as long as she could.

Adult-onset scoliosis, combined with lumbar vertebrae deteriorated by age and pressure from the altered curve of her spine, radically altered Fruin's posture. She developed a noticeable curvature in her spine and a change in the vertebrae that pitched her forward. She had tried cortisone shots, with diminishing results. Finally, when the pain became so bad that she could no longer sleep at night, Fruin followed the advice of a friend. See John Ratliff at Stanford Health Care, she told Fruin.

At least 6 million people in the United States have been diagnosed with scoliosis. It has no definitive cause, although it is widely believed genetics and biology may play some role. The abnormal curvature of the spine that is the most pronounced symptom of scoliosis can appear at any time. With age, however, comes the natural degeneration of discs, the pads of cartilage that cushion the spine's stack of bony vertebrae. The bone on bone grinding becomes one cause of pain; pinched spinal nerves also can send pain signals down through the legs, making every step agonizing. Fruin did the best she could to endure that pain, but found she couldn't hike anymore, or drive, or even climb the stairs in her home.

For many people with scoliosis, medication and other non-surgical treatments can alleviate the pain and discomfort produced by the spinal misalignment it causes. For others, including Fruin, the condition may only respond to surgery. For decades, however, the only available form of corrective surgery for scoliosis meant multiple procedures, staged over days, followed by months of bedridden recovery. The surgery also included a high degree of blood loss and increased risk of infection from the multiple procedures.

At 70, Fruin was not a likely candidate for this type of back surgery. Without it, however, she faced the ultimate horror of being bent forward 90 degrees, her body bent in half. "I was so used to being independent," she said. "I did not want to end up not being able to do anything."

Ratliff has spent much of his career focused on how to make spine surgeries safer and more effective understanding patient and procedure factors, predicting and avoiding complications, and focusing on patient outcomes. He is also an expert in spinal reconstruction and minimally invasive incisions that can reduce infection and recovery time. After seeing Fruin and understanding her condition, Ratliff told her that she had done as much as could be done without surgery—and that he thought he could figure out a way to help her.

"We'll have to do a spinal fusion," he told her, "I'll do it in two steps. I want to wedge the vertebrae to correct the forward pitch, but I won't know if I'll be able to do that until we're in surgery and until I see how well we can correct your specific deformity." Advanced imaging technology can only tell so much of the story, and until Ratliff was able to actually see Fruin's vertebrae, he did not know what might be possible.

Ratliff's procedure turned out to be successful. “He looked so pleased after the surgery," Fruin said. "He had such a happy expression on his face. 'I got all four vertebrae I wanted to!' he told me."

A few days later, he performed a second procedure, where he aligned next to Fruin's spine a titanium rod, secured by screws and wires, from her chest to her pelvis. "He had corrected the curve by 50 percent,” Fruin said. "I had a 55 degree curve that went down to 25 degrees."

Her friends noticed a difference right away. "It was just incredible," Fruin said. "They told me they hadn't seen me stand up straight for years. And I was off all my pain medication 2 ½ months after the surgeries."

Fruin uses arm crutches to stabilize her outdoor walking, but at home, without the risk of being bumped into by others, she doesn't need that extra assistance. She takes a daily hike, volunteers in the community, and lives a busy, physically active life. She was one of the first Stanford Health Care patients recruited to the Patient and Family Advisory Council, a group that was asked by Stanford Health Care administrators for their ideas on the physical design of the new Stanford Neuroscience Health Center. And she knew exactly how doorways, hallways, carpets, floor tile, exits, and entrances could be changed to reduce the physical obstacles faced by people, like her, who navigate life with physical limitations and would prefer not to face those when they go for medical care.

Without the surgeries and the help of Ratliff, though, her return to a pain-free and active life would not have happened. "Without a doubt," she said, "It changed my life."

In January, the new Stanford Neuroscience Health Center will welcome its first patients.This five-story, 92,000-square-foot building includes advanced imaging, patient care technology and interiors designed to be sensitive to the needs of people with neurological conditions. Ratliff will be one of more than 200 expert doctors covering 21 neurological subspecialties providing care for patients at the new Center.