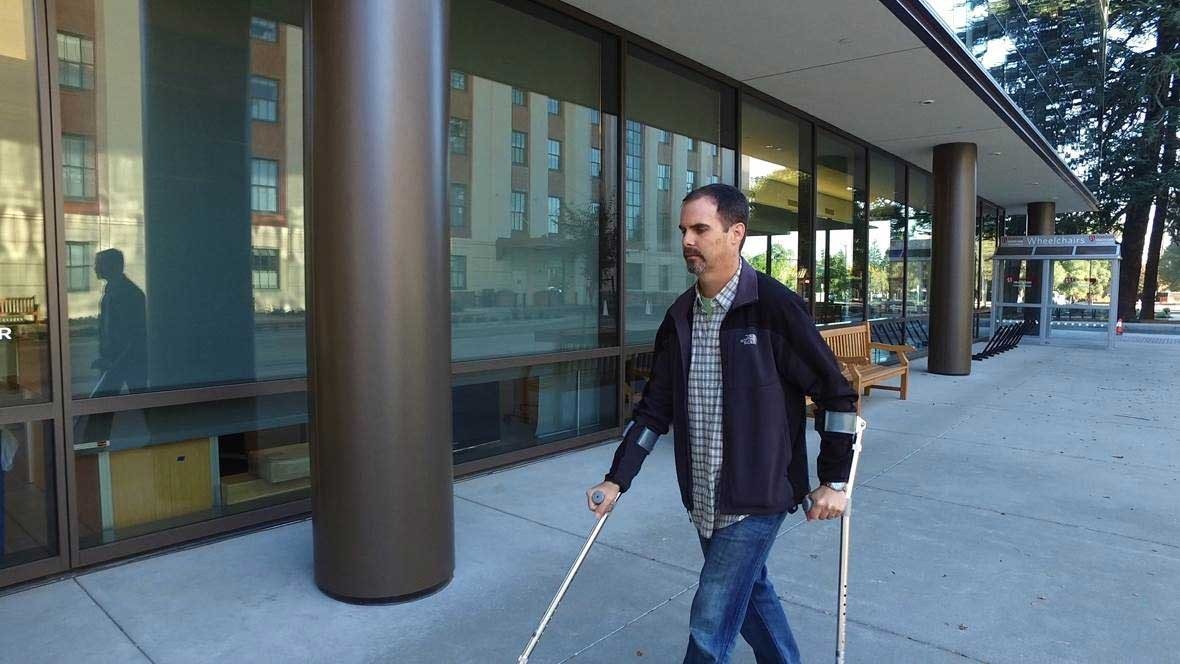 Chris Bjornson's symptoms appeared slowly over time—several years, in fact. “It began with numbness on my left side, a tingling in my arm that progressed down into my leg, but it came and went," he said. "It never entered my head that it could be neurological." He thought it might be stress. He thought his condition would improve if he became more active and took better care of himself.

But, it did not.  It worsened until his inability to balance and coordinate his movements meant he couldn't even walk a few steps safely. When that happened—and he fell and hurt himself trying to walk—he finally went to see a doctor. The doctor diagnosed him with multiple sclerosis, or MS.

Bjornson, then a neurobiological researcher at Stanford, didn't have far to go to find an expert in the condition. Jeffrey Dunn, MD, Division Chief of Clinical Neuroimmunology at Stanford Health Care is a nationally recognized leader in MS research and treatment of people with multiple sclerosis. He has also served as principal investigator in more than 20 clinical trials of new and emerging disease-modifying treatments for MS, 13 of which have since been FDA approved for use.

Dunn also successfully sought membership for Stanford Health Care's MS Center in the Consortium of Multiple Sclerosis Centers. Only 10 MS centers in California are members of this elite group, and only 162 nationwide. Membership in the Consortium means that Stanford Health Care patients have the direct benefit of the group's scientific knowledge and active development of new treatments for MS.

Until he began his own education on the disease, Bjornson, like many, didn't know much about MS. "I think it's one of those diseases that is not well understood by the general population," he said. "But, being a scientist, I tried to learn as much as I could about it." Bjornson has a PhD in developmental biology.

MS, he learned, is a progressive autoimmune disease affecting the nervous system, one with a long history: When the body of a 14th century woman, later canonized as St. Lidwina, was exhumed for study, she became the first documented case of MS. In 1868, French neurologist Jean-Martin Charcot identified its distinctive form of paralysis and a set of diagnostic symptoms. Now, doctors know that the immune system mistakenly targets and destroys the protective tissue around the nerve fiber networks. That destruction interferes with the network's communication between the brain and the central nervous system, causing symptoms that most often include numbness, weakness, dizziness, loss of balance, and muscle spasms.

More than 2 million people worldwide have MS. Its impact is only reversible in the early stages of the disease. It is also the leading cause of non-traumatic neurological disability in young adults. There is still no cure for MS, but there are more treatments now than ever before. "It's a disease of consequence—and it is life changing," Dunn said. 'But we have gone from MS being an incurable and largely untreatable disease when I was a young doctor to having more than 14 disease-modifying treatments."

To be successful, an MS treatment must accomplish the delicate balance of backing down the immune system enough to keep the disease from reaching the brain without suppressing it so much that the patient becomes vulnerable to systemic illness. "It's a great challenge," Dunn said. New therapies use varying paths to halt the MS disease process. That variation is important because "every individual responds differently. What is the best treatment for one person may not be the best for another."

Bjornson, 45, the father of a 10-year-old son, has been a patient of Dunn's since 2008. "I can't say enough great things about him," Bjornson said. Dunn was involved in some of the earliest clinical trials testing whether medication could slow the progress of the disease. Dunn is currently treating Bjornson with state-of-the-art medications, delivered by monthly infusion. Dunn has also incorporated physical therapy into Bjornson's treatment to help him develop the strength and stamina he needs to live as normal a life as possible.

He also joined the recently opened Stanford Neuroscience Health Center's Patient Family Advisory Council, a group that provided many critical insights and observations for how to best treat patients with neurological disorders at the new Stanford Neuroscience Health Center. Bjornson is delighted to see the results of the collaboration. "The new center is much, much easier to navigate for those of us who have movement disorders," he said. "I had to mentally prepare myself to go to appointments. Before the new center, things were not all in one place and I'd have to try to avoid large numbers of people in narrow hallways and pay attention to the changing textures of the surfaces I was walking on. Quarters were cramped—and there were many times when I would have to go to different locations to have an MRI. It was very challenging for someone who has trouble getting around."

In January, the new Stanford Neuroscience Health Center will welcome its first patients. This five-story, 92,000-square-foot building includes advanced imaging, patient care technology and interiors designed to be sensitive to the needs of people with neurological conditions. Dunn will be one of more than 200 expert doctors covering 21 neurological subspecialties providing care for patients at the new Center.

At our Multiple Sclerosis Center, we use the latest therapies to treat complex and rare neurological disorders, including multiple sclerosis and transverse myelitis.
650-723-6469