Tessa's Mystery Condition Gets a Diagnosis 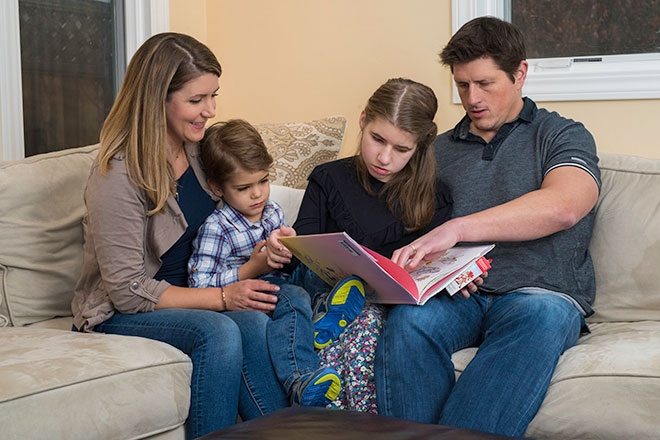 Ten years is a long time in the life of a child. It is an eternity in the world of genomic sequencing. Within hours of her birth in 2003, Tessa Nye began having seizures. At the time, little was known about the cause of her severe form of epilepsy despite years of trial-and-error testing. Her birth came just a few months after the completion of the Human Genome Project, the first sequence of all 3 billion base pairs of human DNA. But broad genetic testing was not yet available to patients.

The Nye family spent years chasing a diagnosis for their daughter, who experienced hundreds of seizures a day, but doctors found no genetic cause for her disorder. The couple went on to have two healthy daughters, and their fears of a genetic basis for their firstborn’s disease dissipated. When Kim delivered her fourth child, Colton, that sense of security was shattered. Within 12 hours of his birth, Colton, a seemingly healthy baby boy, suffered a seizure.

But Colton was born in 2013, in an era when genetic sequencing had become available to patients. Gregory Enns, MD, a pediatric geneticist at Lucile Packard Children’s Hospital Stanford, ordered whole-exome sequencing for Colton within days of his birth, the same test he had ordered for Tessa when it became clinically available in 2012. This blood test examines only the genes that code for proteins, approximately 1 to 2 percent of the genome, not the entire genome.

With two complete sets of genetic data to compare—Tessa’s and Colton’s—as well as the genetic data of both parents, Kim and Zach, the family’s doctors at Lucile Packard Children’s Hospital Stanford were able to identify a single-gene mutation that is the source of both children’s seizures.

“That is the power of whole-exome sequencing,” said Louanne Hudgins, MD, co-medical director of a new collaborative Clinical Genomics Program that launched Feb. 28 at Stanford Health Care and Stanford Children’s Health. “It allows us to make accurate diagnoses in 25 to 30 percent of cases. This has been a total boon to what we do clinically. And it has been a total boon for gene discovery.”

The Clinical Genomics Program will offer whole-exome sequencing and analysis to patients with undiagnosed genetic diseases. The whole-exome sequencing will be conducted on site in a Stanford laboratory, rather than at another institution. Stanford Health Care and Stanford Children’s Health are two of a handful of hospitals nationwide to offer the entire sequencing process in-house. This improves coordination between the doctor requesting the test and the team performing the genetic analysis, helping pinpoint more precise diagnoses for patients, said Hudgins. The clinic will include genetic counselors to help families understand the implications of the results as well as financial consultants to help patients navigate insurance coverage for the test. The program will take referrals from physicians at both the adult and children’s hospitals.

In addition to conducting the initial whole-exome sequencing, every year specialists at the Clinical Genomics Program will reanalyze results from patients whose whole-exome sequencing did not uncover a genetic cause for their disease. New gene mutations are continually being identified: In Tessa’s case, for instance, whole-exome sequencing initially came back normal. It was only with the ability to compare it with her brother’s and her parents’ exomes that the mutation was discovered. “With yearly reanalysis, we can continue to make diagnoses for years,” said Hudgins.

Whole-exome sequencing does not look at all 3 billion base pairs of the human genome, but focuses instead on the approximately 21,000 protein-coding genes that have been found to be more causative of human disease. From those, the Stanford-built computational pipeline narrows down the results to 100 gene variants; each of these must be interpreted through 20 to 40 hours of manual analysis. This labor-intensive process is improved greatly when the lab scientist analyzing the results can work with the clinician who is familiar with patients’ symptoms and disease, said Hudgins. To improve that collaboration, referring physicians will attend weekly meetings to review active cases.

“Sequencing the genomes of patients and families represents the state of the art in genetic testing for patients today,” said Euan Ashley, MD, co-medical director of the Clinical Genomics Program. “It is the essence of precision health, understanding disease at a deeper level so that we can treat it more precisely. You are essentially looking at someone’s DNA and figuring out exactly what is wrong with them.”

For the Nye family, whole-exome sequencing gave them the answer they had sought for years. “As a parent, it was very meaningful to get a diagnosis,” said Kim Nye. “We spent a full 10 years trying to figure out what was going on with our daughter. It’s heartbreaking to see your child’s health totally fail and have nobody be able to tell you why.”

Ultimately, the goal will be to use this information to understand the underlying molecular basis for disease and help develop targeted therapies, Hudgins said.