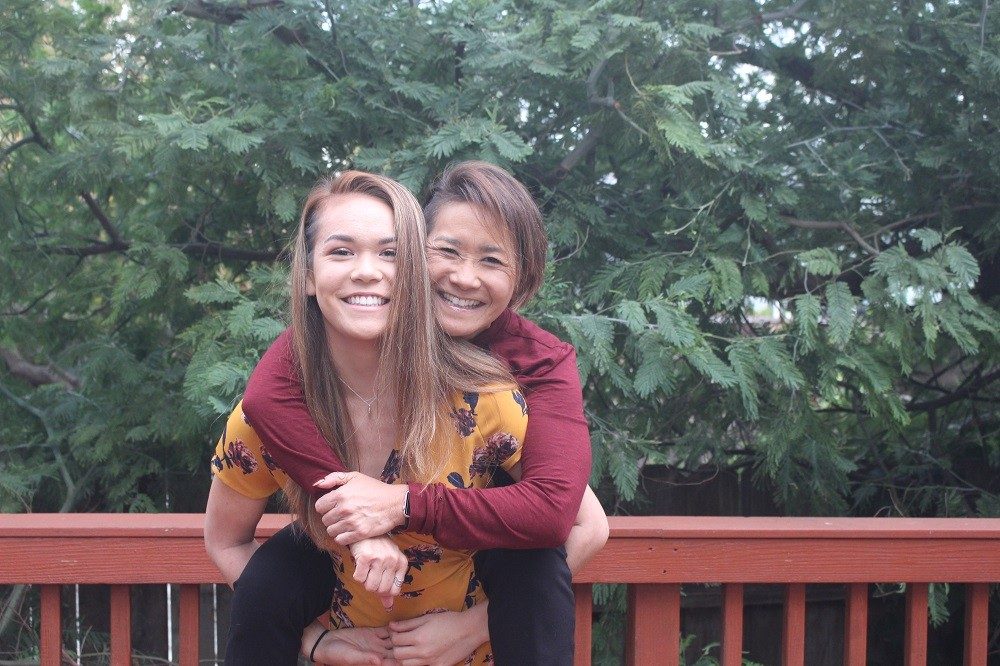 Lung cancer is no longer a disease that only affects elderly smokers. More than half of the patients with lung cancer who come to Stanford Health Care have never smoked, said Heather Wakelee, M.D., a professor of medical oncology at Stanford. Many of these patients are young women like Ginger Powell.

At just 42 years old, she was diagnosed with Stage 4 lung cancer. A persistent shortness of breath became bothersome enough to send her to the doctor, and a chest x-ray identified fluid surrounding her heart, fluid that was found to contain cancer cells. That was in 2010. Powell, a nonsmoker her entire life, was treated aggressively with a standard chemotherapy protocol. That was followed by surgery to remove a tumor on her left lung, and subsequent radiation to eradicate spots her medical team found in her esophagus.

“That’s when my life changed,” recalled Powell. The radiation scorched the inside of her throat, leaving scarring that burned each time she swallowed. “It felt like I was swallowing glass,” she said. And then the coughing began. Day and night, Powell coughed uncontrollably. Her condition worsened. She developed an esophageal perforation, essentially a tear in her throat cavity, which surgeons patched using a stent. Powell spent most of a year in and out of the hospital. Her cough worsened. She was unable to eat. And she had developed a massive empyema infection. That’s when she was referred to Stanford.

“She was really, really sick,” said Wakelee, her oncologist since 2013. “The surgical specialties here at Stanford were the ones to help her get onto a better recovery path.” They removed the stent from her throat, patched her perforation and placed her on intravenous antibiotics for months. Slowly, she began to heal.

Throughout the time she was battling the infection, she was free of any active cancer. Wakelee believes that her infectious complication may have set off a strong immune response in her body, which contributed to her being cancer free for a period of time.

But that changed in 2014. Powell began experiencing intense headaches. An MRI identified six tumors in her brain, one of which was impeding her hand strength. Her medical team at Stanford—Medical Oncologist Wakelee, Radiation Oncologist Iris Gibbs, M.D., and Neurosurgeon, Melanie Hayden Gephart, M.D.—determined the best and safest treatment course was surgery to remove the primary tumor that was causing her most severe symptoms, and to target the other tumors in her brain non-surgically.

“We were hoping to shrink the tumors further to spare her a more extensive surgery,” said Wakelee, so the team tried chemotherapy as part of a clinical trial. When she didn’t respond to the chemotherapy, her medical team used CyberKnife to deliver high doses of radiation directly to her tumors, without damaging surrounding tissue.

“CyberKnife was developed here at Stanford and has been a key part of her treatment, both to the brain and also to her bone where she had some metastases,” said Wakelee. Powell also received microwave ablation, a therapy that uses heat to destroy tumors, for a spot on her liver.

The Stanford team has been able to use a more targeted approach, rather than relying on systemic chemotherapy, to treat Powell’s recurrences because her cancer has been relatively slow growing. Radiation therapy is often better tolerated than systemic therapy by many patients, said Wakelee. Powell has been able to continue working, and has had the energy to raise her young daughter, who was just eight years old when she was first diagnosed.

“We could have justified having her on systemic chemotherapy this whole time, but we decided to focus more on watching her closely and using radiation when needed,” said Wakelee. “Our team is closely aligned, trying at each step to figure out what is the best thing for her. We have been able to keep her active and somewhat off treatment.”

Today, Powell is free of any new cancers, and is closely monitored every three months. Her tumor has been identified as HER2 positive, which Wakelee said opens up new treatment options to her in the future if necessary. “If she does have to face systemic treatment, she’ll have a whole lot of other choices including trial options that she didn’t have when she was first diagnosed,” said Wakelee.

“Everything that has happened to me, Stanford has been able to treat,” said Powell. “Being cared for at Stanford gives me so much hope. My medical team has been able to address any new site where my cancer has returned. I feel like I am receiving the best care from my doctors and nurses at Stanford. They have made my medical journey possible. I just try to remain positive and am grateful for everything I have.”