Stanford University School of Medicine is one of the world's leading medical centers. The Adult Plastic Surgery Clinic, part of the Division of Plastic and Reconstructive Surgery, is strongly committed to excellence in patient care and cross-disciplinary research that brings current medical developments into clinical practice.

Our Locations
Make an appointment 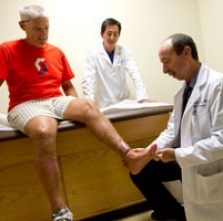 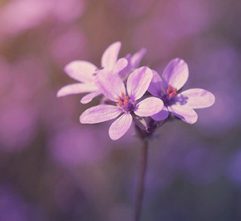 abdominoplasty (Also called tummy tuck.) - a procedure that minimizes the abdominal area. In abdominoplasty, the surgeon makes a long incision from one side of the hipbone to the other. Excess fat and skin are surgically removed from the middle and lower abdomen and the muscles of the abdomen wall are tightened.

anesthesia - lack of a normal sensation brought on by an anesthetic drug.

anomaly - a health problem or feature not normally present in a healthy individual; a deviation from the normal.

Apert syndrome - A craniofacial abnormality characterized by an abnormal head shape, small upper jaw, and fusion of the fingers and toes.

areola - dark area of skin that surrounds the nipple of the breast.

asymmetry - lacking symmetry; parts of the body are unequal in shape or size.

autologous tissue breast reconstruction - the use of the patient's own tissues to reconstruct a new breast mound. The common technique is the TRAM (transverse rectus abdominous muscle) flap. A TRAM flap involves removing an area of fat, skin, and muscle from the abdomen and stitching it in place to the mastectomy wound.

blepharoplasty (eyelid lift) - a procedure in which the physician surgically removes excess fat, muscle, and skin from both the upper and lower eyelids to redefine the shape of the eye.

breast augmentation (Also called augmentation mammaplasty.) - a procedure to reshape the breast in order to make it larger. The procedure can also be performed to reconstruct the breast following breast surgery.

capsular contracture - the most common complication of breast reconstruction surgery; occurs if the scar or capsule around the implant begins to tighten.

chemical peeling - uses a chemical solution in order to improve the skin's appearance. It can reduce or eliminate fine lines under the eyes and around the mouth, correct uneven skin pigmentation, remove pre-cancerous skin growths, and soften acne or treat the scars caused by acne.

cleft lip - an abnormality in which the lip does not completely form. The degree of the cleft lip can vary greatly, from mild (notching of the lip) to severe (large opening from the lip up through the nose).

computed tomography scan (Also called a CT or CAT scan.) - a diagnostic imaging procedure that uses a combination of x-rays and computer technology to produce cross-sectional images (often called slices), both horizontally and vertically, of the body. A CT scan shows detailed images of any part of the body, including the bones, muscles, fat, and organs. CT scans are more detailed than general x-rays.

contractures - an abnormal condition of a joint caused by a loss of muscle fibers or a loss of the normal flexibility of the skin.

coronal suture - the joining line (suture) between the frontal and parietal bones of the skull that crosses the top of the skull from temple to temple.

craniofacial - pertaining to the head (skull) and face.

craniosynostosis - a condition in which the sutures (soft spots) in the skull of an infant close too early, causing problems with normal brain and skull growth. Premature closure of the sutures may also cause the pressure inside of the head to increase and the skull or facial bones to change from a normal, symmetrical appearance.

Crouzon's syndrome - A birth defect characterized by abnormalities in the skull and facial bones, this syndrome often causes the skull to be short in the front and the back. Flat cheek bones and a flat nose are also typical of this disorder.

dermabrasion - a procedure that removes fine wrinkles and/or minimizes scars on the skin; involves the surgeon utilizing a high-speed rotating brush to remove the top layer of skin. The size and depth of the scars, as well as the degree of wrinkling, determine the appropriate level of skin that will be surgically sloughed.

dermatome - an instrument that resembles an electric razor and has an oscillating blade that moves back and forth to evenly "skim" off the surface layers of skin that surround the craters or other facial defects.

endoscope - small, flexible tube with a light and a lens on the end used to look inside an organ or cavity such as the esophagus, stomach, duodenum, colon, or rectum.

endoscopy - procedure in which a lighted viewing instrument (endoscope) is used to look inside a body cavity or organ to diagnose or treat disorders.

expander/implant breast reconstruction - the use of an expander to create a breast mound, followed by the placement with a permanently filled breast implant.

facial implant - cosmetic plastic surgery to change the shape of the chin, check, or jaw. This procedure is typically done to enhance certain facial features, or to bring a certain aspect of the face into proportion with the rest of the facial structures.

flap surgery - one type of surgery that involves transporting healthy, live tissue from one location of the body to another - often to areas that have lost skin, fat, muscle movement, and/or skeletal support. There are several different types of flap surgery methods that may be utilized, depending upon the location of the flap and the structures that need to be repaired.

forehead lift - the surgical removal of excess fat and skin, as well as a tightening of the muscles in the forehead area. It can correct sagging brows or deep furrows between the eyes. It is often done in conjunction with a facelift in order to create a smoother facial appearance overall.

gynecomastia - a condition in which the male's breast tissue enlarges. Gynecomastia literally means "woman breast." This increase in tissue usually occurs at times when the male is having hormonal changes, such as during infancy, adolescence, and old age.

hematoma - blood that collects under the skin or in an organ.

liposuction - a procedure that removes excess fat through a suctioning process. Although liposuction is not a substitute for weight loss, it is a way of changing the body's shape and contour.

macrodactyly - a congenital problem in which there is an abnormal growth of a finger.

mastectomy - surgery to remove portions of or all of the breast.

maxillofacial - pertaining to the jaws and face.

nasal - relating to the nose.

otoplasty (ear surgery) - a type of cosmetic plastic surgery procedure aimed at setting prominent ears closer to the head, or reducing the size of larger ears.

partial abdominoplasty - a "mini tummy tuck." This procedure is ideal for individuals who have fat deposits limited to the area below the navel.

Pfeiffer syndrome - A birth defect characterized by abnormalities of the skull, hands, and feet.

plastic surgery - the surgical specialty that deals with the reconstruction of facial and body tissue that requires a reshaping or remolding due to disease, a defect, or disorder - in order to approximate a normal appearance or to repair working ability.

polydactyly - a congenital problem characterized by an increase in the number of fingers or toes.

reconstructive plastic surgery - one type of plastic surgery that is performed on abnormal structures of the body that may be caused by trauma, infection, developmental abnormalities, congenital defects, disease, and/or tumors. This type of surgery is usually performed to improve function, but may also be performed to approximate a normal appearance.

rhytidectomy (Also called facelift.) - a surgical procedure that involves the removal of excess facial fat, the tightening of facial muscles, and the stretching of facial skin - to approximate a smoother, firmer appearance. The procedure takes place on either the face, neck, or both.

Saethe-Chotzen - A birth defect characterized by an unusually short or broad head. In addition, the eyes may be spaced wide apart and have droopy eyelids, and fingers may be abnormally short and webbed.

scar - the body's natural way of healing and replacing lost or damaged skin. A scar is usually composed of fibrous tissue. Scars may be formed for many different reasons, including as a result of infections, surgery, injuries, or inflammation of tissue.

septoplasty - the surgical correction of defects and deformities of the nasal septum (the partition between the nostrils).

skin grafts - a skin graft may be used to cover skin that has been damaged and/or is missing. This surgical procedure involves removing healthy portions of skin from one part of the body to restore normal appearance and/or function to another portion of the same body. The location where the skin is removed is called the donor site. There are various types of skin grafts that may be utilized, depending upon the size and location of needed skin.

syndactyly - a congenital problem characterized by a union of fingers or toes.

tissue expansion - a surgical procedure that involves inserting a balloon-like device (called an expander) under the skin. The expander then slowly secretes liquid into the area to be repaired to actually stretch and expand the skin. This serves the function of "growing" extra skin to repair nearby lost or damaged skin.

varicose veins - twisted, widened veins caused by swollen or enlarged blood vessels. The blood vessels have enlarged due a weakening in the vein's wall or valves. 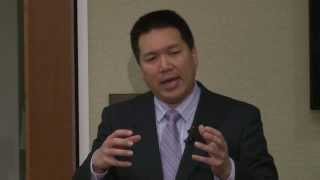 Endurance athlete Clifford Barnes developed a serious bone infection after being run over by a car. Careful work by his medical team at Stanford saved his leg.

You are welcome to schedule an appointment yourself. However, we encourage your regular doctor to contact us so we can resolve issues or logistical problems that cause delays in seeing a plastic surgeon. Your regular doctor should also review information for health care professionals.

As surgeons, we share your goal of providing the best possible care for your patients. We also strive to integrate training, research, and the development of novel technology with clinical care. Throughout and after their treatment at Stanford, we encourage patients to maintain close contact with their primary care and referring physicians.