The RVOT tachycardias are commonly triggered by sympathetic stimulation such as anxiety and excitement. In additional stimulants such as caffeine seem to have a provocative role.  In pre-menopausal women, hormonal influences also seem to be significant.

The initial evaluation of patients with suspected normal heart ventricular tachycardias centers around confirming that there are no subtle abnormalities of the heart, particularly the right ventricle. Echocardiography is usually the first step with some patients also receiving a cardiac MRI with delayed enhancement. This is particularly important to exclude mild forms of arrhythmogenic right ventricular dysplasia/cardiomyopathy.

Patients with a family history of sudden death and apparent RVOT tachycardia should be particularly thoroughly with a cardiac MRI.

The next step in the evaluation is the documentation of the ECG pattern of the ventricular tachycardia on an ECG with all 12 leads. This documentation is necessary to confirm that the pattern is consistent RVOT tachycardia.  If the ECG pattern is atypical, for example, one might be more concerned about mild forms of arrhythmogenic right ventricular dysplasia/cardiomyopathy.

The treatment of RVOT tachycardias begins with reassurance since understanding that although this is a form of ventricular tachycardia, the condition is felt to be benign. The next step is avoidance of any stimulants such as caffeine that may be exacerbating the arrhythmias.  Pharmacologic therapy usually starts with beta-blocker therapy.  Beta-blocker therapy is usually more effective than calcium channel blocker therapy. If the patient remains particularly symptomatic despite pharmacologic therapy, one may consider catheter ablation of the RVOT tachycardia.  Patients with frequent PVCs (for example 5-10%) provide an excellent endpoint in addition to the inability to produce the PVCs with isoproterenol, an adrenaline-like substance. This therapeutic approach is the same for patients with highly symptomatic PVCs without ventricular tachycardia if the PVCs are localized to the RVOT.

The threshold for PVC or RVOT ablation is relatively low if there are frequent PVCs since because the ablation does not require access to the left side of the heart which has a higher risk of stroke and other complications and the success is generally high. 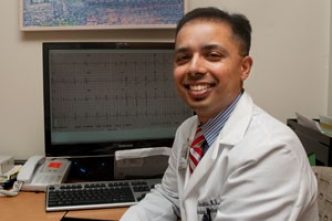