How We Can Help You for Trigeminal Neuralgia

Our program’s multidisciplinary team brings together world-leading neurosurgeons, neurologists, radiologists, pain management specialists, psychiatrists, and other professionals to deliver the most advanced diagnostic and treatment options based on the latest research findings.

Our goal is to provide long-term, minimally invasive solutions, personalized to your needs, to relieve your pain and improve your quality of life.

While medications may be an effective treatment for most patients, surgery is another great option in situations where medications are unsuccessful. Our team of high volume physicians and surgeons have expertise in all treatment approaches, including the full spectrum of surgical procedures and the next generation therapies; such as Neuromodulation therapy and clinical trials. As a world-renowned institution for conducting innovative research that advances the standard of care, Stanford Health Care provides cutting edge therapies for our patients.

What We Offer You For Trigeminal Neuralgia

Our experts offer the full range of treatment options for trigeminal neuralgia (TN) and facial pain. We precisely personalize your care plan to meet your specific needs.

For some patients, medication provides pain relief. Regular pain medications are not effective. Instead, anti-seizure medications (typically used to treat epilepsy by slowing electrical nerve impulses) have shown to be effective for controlling pain associated with trigeminal neuralgia. This is logical – electrical currents in the brain can cause seizures; electrical currents in the face occur in trigeminal neuralgia. Even though anti-seizure (also called anticonvulsant) medications were not developed to treat pain, they provide pain relief by reducing the trigeminal nerve’s ability to send pain signals.

Medications used to treat TN include:

Carbamazepine: This drug (brand names include Tegretol® and Carbatrol®) can treat the condition very well but also cause side effects such as drowsiness, unsteadiness, difficulty with coordination and memory, slurred speech, and difficulty with thinking or remembering. This treatment also requires that you get regular blood tests to check your white blood cell count, platelets, and liver function. However, it works better on the pain of trigeminal neuralgia than most other medications, and it has been used safely for years by millions of people for seizures. Most patients start on low doses, which their doctor may gradually increase until achieving the best pain relief with the fewest side effects.

Other medications your doctor may prescribe for trigeminal neuralgia pain relief include:

Antispasmodics
In combination with other treatments, your doctor may prescribe muscle relaxants such as baclofen (Gablofen®, Lioresal®).

Botox® (onabotulinumtoxinA injection)
Injections of Botox may help reduce pain for some patients.

Many other medications can help. Your doctor can help you find the best treatment for your condition.

Stanford performs the most advanced, minimally invasive surgical procedures to treat trigeminal neuralgia. Some of these procedures are available only from Stanford Health Care; others are available at only a few select hospitals worldwide.

Surgical options at Stanford include:

Percutaneous radiofrequency lesioning
We offer a variety of percutaneous ablative procedures (using heat or chemical agents to treat damaged nerves), including radiofrequency gangliolysis (breaking up noncancerous cysts), glycerol rhizolysis (injection of a chemical to destroy problem nerves), balloon compression, and Botox injections, to decrease or stop nerve impulses causing pain. These procedures are effective in 80 to 90 percent of patients, although pain recurrence is more common.

CyberKnife radiosurgery
Since inventing CyberKnife in 1994, we continue to offer the most experienced CyberKnife program in the world. Our specialists use the system to precisely treat a variety of conditions. We originally developed this noninvasive outpatient procedure to treat tumors with very targeted doses of radiation. Now we apply it to nerves that are causing problems. CyberKnife radiosurgery delivers radiation doses to the precise location where the nerve enters the brain.

Microvascular decompression
We use decompressive procedures to remove the blood vessel compressing the trigeminal nerve. This surgery effectively relieves pain in more than 85 percent of patients and can offer long-term relief. But it is also the most invasive surgical treatment option. The risks can be very serious, so it is essential to choose a surgeon who is familiar with the procedure and has done many. It is also important to know that although this is the most permanent treatment, pain recurs in up to 20 percent of cases, probably because blood vessels can regrow.

In addition to medication and advanced surgical procedures, we offer neuromodulation therapies that target the brain and nervous system with electrical stimulation to help relieve pain caused by trigeminal neuralgia.

Motor cortex stimulation
Stanford Health Care is one of the few institutions in the nation offering this procedure for trigeminal neuralgia. Our surgeons are not only experts in surgically placing implants in the brain, but also in reprogramming implants for patients who had initial pain relief that did not last.

Some people find their trigeminal neuralgia symptoms improve with alternative treatments, such as acupuncture, chiropractic care, vitamin therapy, nutrition therapy, and biofeedback. Talk with your doctor about these and other options. Before trying any new treatment, always check with your healthcare providers to make sure it is safe and doesn’t interact with any other treatments you receive.

Clinical trials are research studies that evaluate a new medical approach, device, drug, or other treatment. As a Stanford Health Care patient, you may have access to the latest clinical trials.

Open trials refer to studies that are currently recruiting participants or that may recruit participants in the near future. Closed trials are not currently enrolling, but similar studies may open in the future.

Closed trials are not currently enrolling, but may open in the future.

What is Trigeminal Neuralgia?

Trigeminal neuralgia (TN) is a type of nerve pain that specifically affects the face. It usually occurs in people over age 50 but can occur at any age, even in infancy. Women experience the condition more commonly than men.

TN is progressive. Attacks of pain usually get worse over time, with fewer and shorter pain-free periods before they recur. Eventually, pain-free intervals disappear.

Flare-ups of trigeminal neuralgia often begin with a tingling or numbness and progress to intense bursts of sharp pain.

The parts of the face most commonly affected by trigeminal neuralgia include:

While it is less common, trigeminal neuralgia also can affect:

Trigeminal neuralgia usually affects only one side of the face. In rare cases, it can affect both, although not at the same time.

What are the symptoms of TN?

Trigeminal neuralgia is characterized by sudden attacks of severe, shooting pain in the face. This pain typically lasts anywhere from a few seconds to a few minutes. A pain-free period is known as a remission.

How is TN diagnosed?

Accurate diagnosis of trigeminal neuralgia relies heavily on patients’ ability to describe the location and type of pain they are experiencing. Giving your doctor details of the pain – when it occurs, where, and how often – may help with making a diagnosis.

Stanford Brain and Spine Tumor Center
Receiving a spine or brain tumor diagnosis can feel overwhelming, even if it’s noncancerous. Our world-class experts have specialized training and experience in treating even the most complex spine and brain tumors. 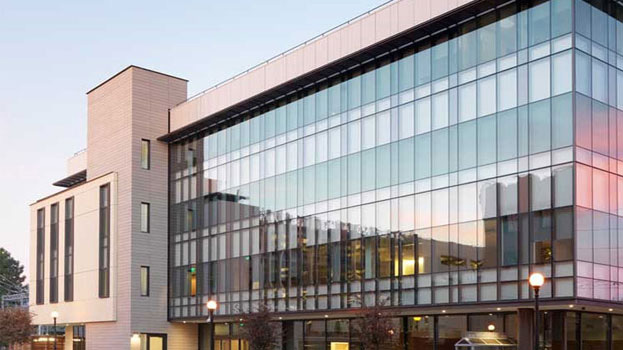 View All Locations »
MAKE AN APPOINTMENT FIND A DOCTOR