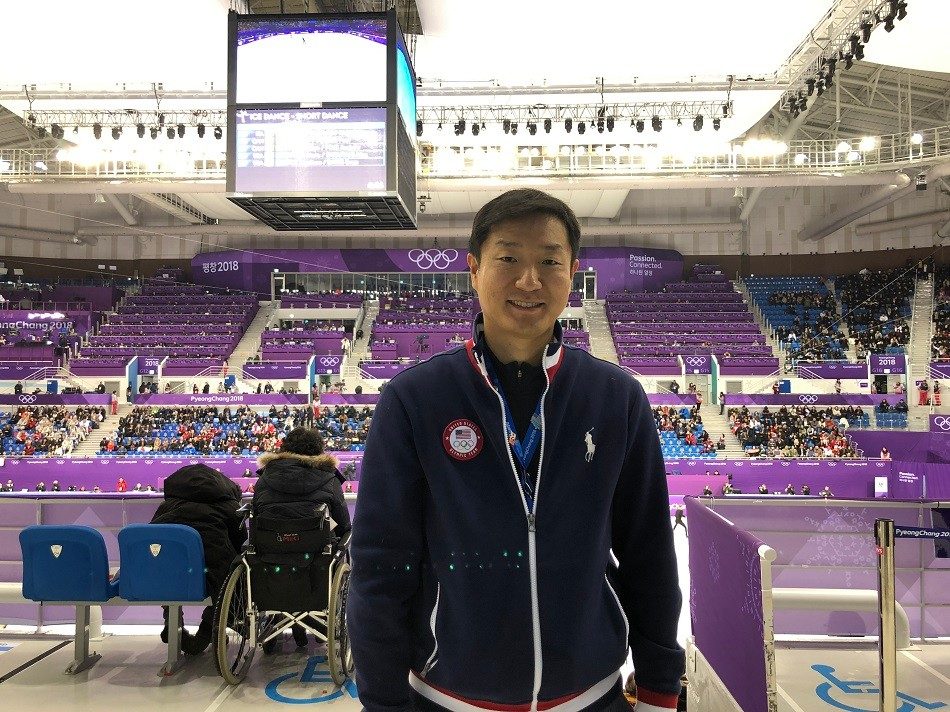 Stanford's Eugene Roh, M.D., was a Team USA physician at the 2018 Winter Olympics in Korea earlier this year.

When an American bobsled pilot began experiencing intense abdominal pain on the first day of his Olympic training in Korea, he was brought to the Team USA medical clinic in the Mountain Olympic Village. There, a team of doctors assessed and quickly diagnosed his acute appendicitis. He was sent to the International Olympic Committee Hospital, where medical staff, including Stanford’s Eugene Roh, M.D., managed his condition. Roh, who is fluent in Korean, worked with local medical staff to ensure that the athlete could have his appendix removed in a minimally invasive fashion to give him the best chance of recovering quickly, and possibly competing. After a laparoscopic appendectomy, he was able to pilot the USA’s two- and four-man bobsleds and finish his races.

That was just one of several medical emergencies handled by the Team USA medical group. But in the Olympics, where athletes train for a lifetime to compete every four years, “Every case is important,” said Roh, a Stanford sports medicine physician who traveled to Korea as a physician for Team USA during the 2018 Winter Olympic Games. “If an athlete is injured or gets sick, getting them safely back to performance level is our top priority,” he said. Even a mild infection can be a big deal in the high-stakes world of the Olympics. “We try to do everything we can for the athletes to make sure they can compete, but we must always do right by them medically. And we must get everything done fast. That was a challenge.”

Roh arrived in Pyeonchang a week before the Olympics began to help set up the medical center, which was located on the first floor of the Team USA’s 25-floor apartment building. Roh worked at the United States Olympic Committee (USOC) Sports Medicine Team’s medical clinic from 7:30 a.m. until 10:30 p.m. every day and had to be online and available at all hours of the day and night.

Everyone with a medical issue came to our clinic, said Roh. “We saw curlers, figure skaters, speed skaters, ice hockey athletes. Many of the athletes seen in the media were seen in our clinic for treatment and post-game recovery.”

In addition to caring for the athletes, the USA medical team provided care to hundreds of support staff and members of the USOC.

With a norovirus affecting Korea just outside the fence of the Olympic village, there were a lot of precautionary measures being taken to prevent an outbreak inside, said Roh. Application of rapid diagnostic testing helped identify infected people quickly. “One outbreak could affect the whole community,” he said. The weather was another challenge. A 50 to 60 temperature swing between the bitter cold outside and the warm temperatures indoors caused a lot of people to become sick. Roh, who is dually trained in internal medicine, physical medicine and rehabilitation (PM&R), and sports medicine, used his skills equally, treating musculoskeletal injuries and colds, flu and infections.

“We tried to provide as much care as we could in our own clinic, using our own medications and treatment tools to help recovery,” said Roh. When more-severe medical emergencies occurred, Roh worked with the local hospital to deliver the same treatment available in the United States. “That was part of my job, to communicate with the Korean medical facilities and make sure everything was done in the right way,” he said.

Despite his 24/7 schedule, Roh was able to catch a few Olympic highlights. He was at the Ice Cluster Complex with his son when the USA women’s hockey team won gold. “That was amazing,” he said. He also watched speed skating and curling, and spotted Ivanka Trump among the spectators.

Living among athletes from all over the world in the Olympic village was its own source of “Olympic moments” for Roh. While doing laundry, he met and talked with a U.S. short-track speed skater who once trained in Korea. Walking through the village, he met USA women’s hockey gold medalists who took pictures with his son. He learned the Olympic tradition of trading pins with athletes, and sat near North Korean athletes in the dining hall, a unique experience for Roh, who was born and raised in South Korea, with no exposure to the north.

“I was in the land of Korea, where I grew up, living on the island of USA,” he said. “I was able to connect to my memories of attending the Olympics 30 years ago, and pass on the experience to my son, who is nearly the same age as I was when I saw the Olympics for the first time. That was a special and unique experience for me.”

When asked if he would volunteer again as a Team USA physician, Roh was quick to say yes. “I am so inspired by these athletes,” he said. “It’s a very special experience to see all of these people working toward one goal. It can be very stressful. But when you help an athlete return to competition, that’s the best reward.”