Like most sporty kids, he dreamed of one day going to the Olympics: He achieved that goal — just not quite how he imagined it.

The sports medicine specialist is spending much of his time these days caring for the U.S. athletes in Tokyo who fall off their skateboards, crash into opponents on the rugby field, botch a landing from the parallel bars, or get into any number of the mishaps that occur in sports from boxing to bicycling.

“I’m treating cuts and bruises, sewing people up,” he said. “The usual injuries when people are getting banged around.”

He and Michael Fredericson, MD, professor of orthopaedic surgery and the head physician for Stanford’s track and field team, are among thousands of physicians caring for the athletes and officials at this year’s Olympic Games. While they treat injuries, they also address general medical concerns, including evaluating people for COVID-19.

Fredericson, noting that Japan has strict COVID-19 protocols, said he’s spending “a lot of time screening athletes for any symptom suggestive of COVID.”

Isono said the athletes are appreciative, gracious and polite. But they’re also resilient. “These kids are tough,” he said. “If I was in their situation, I’d be crying. They’re like, ‘I’m good,’ and we say, ‘No, we have to put that bone back into place.’”

Fredericson and Isono have been working at Olympic and Paralympic Games since the 1990s. Fredericson was also the U.S. national track and field team physician from 2002 to 2008; Isono was the team physician for the Golden State Warriors during the 1990s (“I was with them when they were really, really, really bad,” he said) and again starting in 2011 (when “we were very good, winning three NBA championships”).

Some physicians serving at the Olympics are attached to a team, such as U.S. swimming or Brazilian soccer. Others care for everyone in their nation’s delegation. Most nations, even those with few athletes, arrive at the Olympic games with at least one physician, Isono said. The host country also runs the Olympic Polyclinic, where specialists of all kinds — including dermatologists, dentists and ophthalmologists — see athletes or officials from any team.

The Olympic clinics are well-stocked with imaging and laboratory equipment, medication, gauze and other supplies, and can support most every procedure except surgery, Isono and Fredericson said. When necessary, athletes are taken by ambulance to a local hospital.

For the first time this year, the U.S. Olympic delegation includes mental health professionals, an addition the physicians welcome. “There has been a lot of mental stress among the athletes,” Fredericson said.

“If you’re the world champion and you come here expecting gold and don’t medal, it’s a huge blow,” Isono added.

Isono is working for the U.S. Olympic Committee, and Fredericson is working for the International Olympic Committee, rather than for a specific team, so they’re treating athletes of all stripes. Isono also oversees clinics at sporting venues such as the surfing beach and the track-and-field stadium. (For high-impact sports, the well-staffed clinics practice treating mock patients, he said. For example, one staffer might pose as an injured boxer, and the clinicians practice putting a neck brace on her and transporting her to an ambulance.)

Fredericson, who cares for athletes and officials from all nations, said that working alongside physicians from around the world is a learning experience: “It’s always interesting to see how other sports medicine professionals care for their athletes,” he said. “There are some subtle and not-so-subtle differences from country to country.”

COVID-19 participates in the Olympics

Because of COVID-19 protocols, the two are unable to tour Tokyo or attend many of the athletic competitions. Part of Isono’s job is to travel to the venue clinics, so he’s able to see a little of Tokyo. Fredericson, a seventh-degree black belt who was a distance runner in college, hopes to pull strings so he can watch a few karate matches and track-and-field events.

Mostly, however, they’re in the clinics, where the athletes having their limbs iced and scrapes bandaged argue over which event to watch on television. “Everyone wants to watch a different sport, whether it’s women’s 3x3 basketball or table tennis,” Isono said.

Isono said his patients are healthier than patients he’s treated at the Olympics in the past. COVID-19 protocols mean the athletes aren’t getting respiratory infections that were more common at previous Olympics. “Normally, with so many people from all over the world in a small space, people just start getting sick and it goes around like a wildfire,” he said. “Not this year.”

Despite having limits on their movements and restrictions that are keeping their family and fans away from Tokyo, the physicians believe that holding the Olympics during a pandemic has been healing for athletes, as well as those watching the events on television from home.

“With COVID, we’ve had this global bummer,” Isono said. “But now, we have an event that unifies us and brings us out of this hole we’ve all been in.”

“It may sound corny,” Fredericson added, “but it gives me great hope to see athletes, coaches and medical professionals from all over the world come together for one event.”

By MANDY ERICKSON
Mandy Erickson is associate editor in the Office of Communications
Email her at merickso@stanford.edu

Want to stay connected and informed?

Sign up to receive updates on innovations at Stanford Health Care, including the latest research and resources, advances in treatment and technology, and more 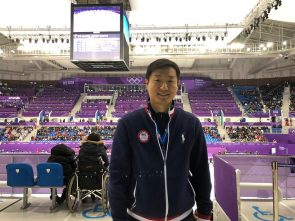