The latest in laser eye surgery. 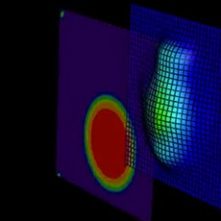 Custom LASIK is the most advanced laser technology available. Custom LASIK laser treatments are based upon the unique visual characteristics of your eye. Up until now, with glasses, contacts and conventional LASIK surgery, corrections were quite similar for each type of prescription. Custom LASIK involves measuring the eye from front to back with a special laser, using what's called "wavefront" technology, to create a three-dimensional (3-D) image of the eye. The information contained in the wavefront-map guides the laser in customizing the treatment to your individual visual system.

Custom LASIK wavefront technology is revolutionary because it has the potential to improve not only the quantity of your vision (i.e. the visual acuity measured by the standard 20/20 Snellen eye chart), but also the quality of how well you can see (i.e. visual acuity measured in terms of contrast sensitivity and fine vision). This may translate into a reduced risk of post-LASIK untoward side-effects, such as difficulty with night vision.

The Visx Wavescan system was the first laser to be approved by the U.S FDA for the treatment of nearsightedness and astigmatism. The VISX WaveScan system is made up of the Star S4 laser and the WaveScan wavefront device. The company calls its custom LASIK procedure "CustomVue." The FDA approval is for eyes with up to -11 diopters of myopia, with or without up to -3 diopters of astigmatism. Surgeons can, for the first time, measure and treat visual disorders that previously could not be detected.

The surgeon will begin by using the wavefront device to transmit a safe ray of light into your eye. The light is then reflected back off the posterior portion of the eye, out through the pupil, and into the abberometry device. The reflected wave of light is received and arranged into a unique pattern that measures both lower- and higher-order aberrations.

All of these visual measurements are then displayed as a 3-D map, referred to as a wavefront map. This information is then electronically transferred to the laser, and computer-matched to the eye's position, enabling the surgeon to customize the LASIK procedure to your unique visual requirements.

Like conventional LASIK, custom LASIK is a surgical procedure and has risks associated with it. It's important to discuss its applications and potential complications with your eye doctor to determine if you are a good candidate for this procedure.

View an article on Custom LASIK in the Stanford Report, and read more about Custom LASIK at the official VISX website for this procedure.